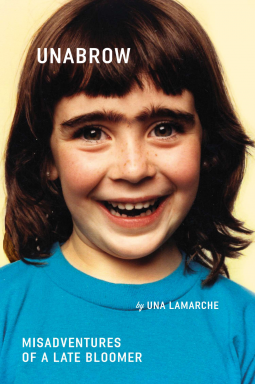 Una La Marche is an author, who was also my castmate during the 2012 New York City Production of Listen to Your Mother. Which was amazing (as I wrote in this ode to it).

She has since gone on to write several books. In her latest, UNABROW (Plume), Una shares her awkward stumbles into adulthood, from how to care for her unibrow to finally learning how to drive at the age of twenty-five.

Her book contains all the advice Una wishes her mother had given her and the cringe-inducing lessons she’s learned along the way including:

· Rules for Sitcom Living: “When I was in my twenties, my friends and I fancied ourselves a down market version of Friends, and this is just as obnoxious as it sounds.”

· Designer Imposter: “Tim Gunn once complimented me on my sandals, and I feel that qualifies me to give style tips FOR LIFE.”

· Body Metamorphosis: “A woman’s relationship with her body is based on such an advanced amalgam of math, physics, and behavioral psychology that I don’t think anyone would pass if it were a written test.”

· How to Be a Perfect Parent in 5 Easy Steps, or Never: “No one knows anything about how anyone else should parent, least of all me. So here, let me give you tips!”

I really enjoyed Una’s take on her personal stories based on questionable life choices. She has a self-deprecating wit and a hilarious way of making a point that will remind you of Amy Poehler. Order the book now

To one lucky reader in the United States, I am giving away a book. a Rafflecopter giveaway